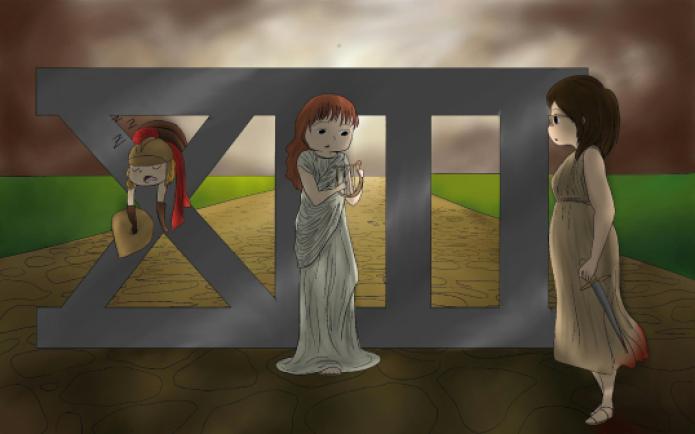 Okay, so this episode was utterly brutal and made my heart hurt. Caesar is making Cicero and Brutus publicly endorse him at the senate. Side note: It seems like moderate levels of interpretive dance are incorporated into any sort of public speaking. Even Vorenus does it while he’s giving impromptu election speeches. What the hell, Vorneus. 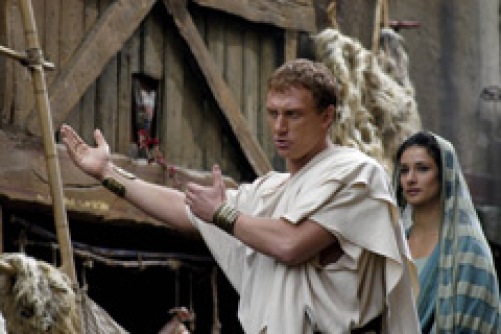 Atia goes to visit Servillia to gloat ask after her health and find out if she’ll be attending Caesar’s Triumph which is a huge victory party/parade/ego stroke/installation of Caesar as a living god.

Octavian is dispatched to bring his sister home for the Triumph. She’s currently living in some sort of goddess worshiping religious community and atoning for her transgressions by cutting herself.

Servillia takes in Quintus, Pompey’s son, and basically replaces Brutus with the other man and begins penning pamphlets against Caesar and publishing them in Brutus’ name.

Caesar gets his face painted with blood (like you do) and rides his elephant drawn chariot into the throng of people so he can be properly worshipped.

Pullo, at loose ends, wants to rejoin Legion XIII, but the soldiers turn him away, so he moves on to choice number two, which is asking Vorenus to free Eriene so he can marry her. Please note: he doesn’t bother to ask Eriene if she’s down for this.

He tells her she’s free and gives her a dress, she thanks him and goes to put it on and a man runs out and profusely thanks Pullo for Eriene’s freedom because now they can get married, etc. Pullo looses his goddamn mind and repeatedly bashes the guy’s head into a stone pillar and kills him. Eriene is, understandably, destroyed, Vorenus is pissed that Pullo killed his property in front of his children, Pullo is sorry and Vorenus sends him away. 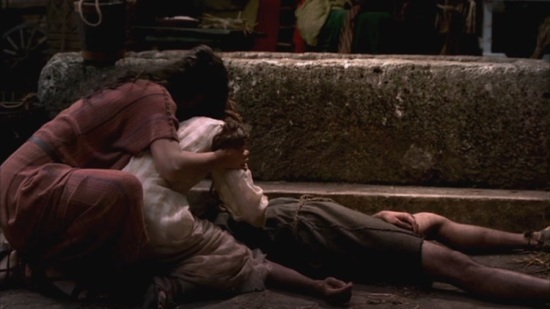 Pullo attempts to drink away his troubles in a pub, and eveyone’s favorite mobster, Eurastes, offers him a job that Pullo turns down with the ironic phrase, “I’m a soldier, not a murderer.”

I don’t know why it amused me so much, but I think my favorite part was Caesar’s dialogue about wearing the color of royalty.

“I don’t know…I think it’s too purple. I want to suggest purple without actually wearing it.”

OMG. ALL OF IT. But especially Pullo killing Eriene’s fiancé.

They’re both being just awful – to each other, to their children – they’re just the worst.

Warning: Not the usual warm fuzzy slash canon. Okay, so I’m cheating a bit because Jess and I had this discussion this week, but it’s that Pullo is suffering from traumatic brain injury syndrome. Now, it’s true that Pullo never had great impulse control even before the makeshift brain surgery. But since then, it seems worse – particularly coupled with his excessive drinking and obvious depression. After he loses his shit and murders Eriene’s fiancé, he almost childlike in his response and apology as if not understanding the severity of his actions. Of course, some of that could also be attributed to to slaves being less than people and therefore having less of a reaction. But I do think traumatic brain injury syndrome could definitely be a component. NOT that his excuses his actions at all.

Oh, you know…Atia being Atia.

4 thoughts on “Rome S01E10: Triumph or The One Where My Heart is Utterly Broken”

See this freaking gorgeous woman? I got to hold he

A little morning meditation before officiating @a

As seen at the #homedepot on Alpine. Not sure if t