Okay, so some of you may remember a couple months ago when my daughter, Killian, tormented me with images of a certain creepyass dog.  If you don’t remember that, you may want to check that out first, or this post won’t make a whole lot of sense.

I feel like some of you will be delighted to know that I completely forgot that the dog picture was taped to my driver’s license, and I didn’t even look at it before handing it to the pharmacist when I was picking up my Adderall. a few weeks ago. It was only when he started laughing that I realized the damn picture was still on there. And of course it was the hot pharmacist… I ended up having to explain the whole thing, and he thought it was hilarious.

Other than that, I haven’t really given the dog a whole lot of thought lately.

Until I got out of the shower, this morning.

I went to put on my glasses and… 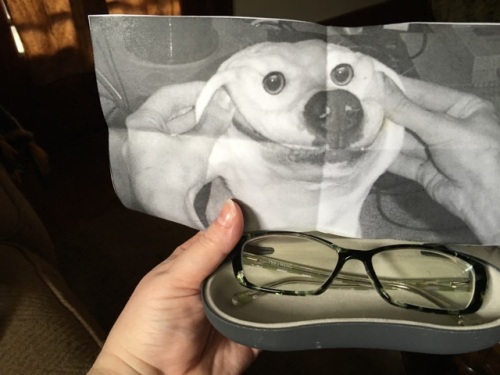 I immediately hollered for Killian who had no idea what I was talking about. Then we heard the snickering from the other room. Apparently, Corwin decided to pick up where his sister had left off.

4 thoughts on “My Kid is a Hilarious, Hilarious Jerk – Update”