Okay, so the episode opens with a troupe of circus type performers arriving in Camelot to celebrate Arthur’s birthday. Merlin’s delighted, but Arthur’s dismissive. He doesn’t have time for silliness like birthdays. But he has to put in an appearance. It’s his party, after all. And even Uther gets his clothes on, brushes him damn hair and makes an appearance. He’s feeling particularly father-y tonight.

The performers are there, unsurprisingly, to make a hit on the royal family, hired by yet another kingdom with a grudge against the Pendragons. This time, Arthur is the target rather than Uther. The head of the troupe goads Arthur onto the wheel in order to show off his mad knife throwing skills. I think it needs to be pointed out that if I had Arthur tied to a wheel many other things would have happened. I’m not saying knives *wouldn’t* have been involved. They just would have been used for *ahem* other things. But I digress. 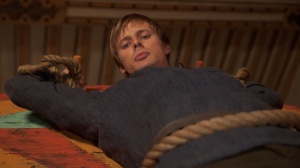 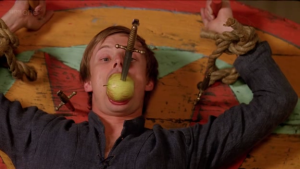 Anyway, after Arthur spins around on the wheel and gets daggers thrown at him and the apple in his mouth, he trundles off to bed a little woozy. The apple was treated with a sedative. Merlin is all, “Go home, Arthur. You’re drunk.” But Arthur goes to see his father instead. The performer guy sneaks into Uther’s chamber and attacks Arthur. Arthur groggily defends himself, but the sedative is overpowering him. Uther, with one last burst of energy and paternal love, rises from his seat by the window and protects his son. 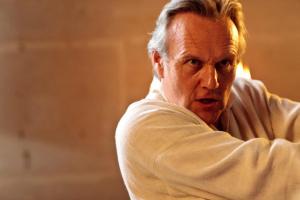 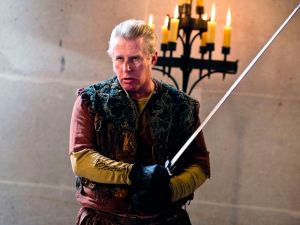 So, Uther kills the assassin, but not before the assassin stabs Uther in the chest. The battle’s done and we kinda won, so let’s… -Wait. Wrong show. Anyway, Arthur calls for help while he holds his dying father. And there’s what’s meant to be a touching moment between them, but after as shitty as Uther has always treated Arthur, it’s too little, too late. 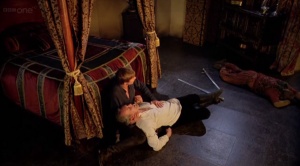 Later, we see Uther in his bed and Gaius telling Arthur that the dagger had been poisoned and it had touched Uther’s heart. There’s nothing to be done for him except wait for him to die.

Arthur’s not having it and decides to use magic to save his father. There’s a lot of angst over this since magic killed his mother, his father was against it, etc. but Merlin thinks this is a super idea. He figure if he can save Uther, Arthur will understand how super awesome magic is and everything in Camelot will forever be awesome.

This isn’t gonna happen. Agravaine, the Douchey, goes to Morgana’s hovel to grovel before her and be uncomfortably sexually attracted to her while he tells her Arthur’s plans. And freaks about Emrys being her destiny and her doom. She then makes an evil charm to put around Uther’s neck where any healing magic directed at Uther will turn against him and kill him. Agravaine sleezes back to Camelot and places it around Uther’s neck. 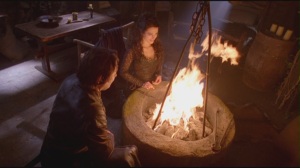 Meanwhile, Arthur and Merlin go out to find a sorcerer that will help – Merlin’s alter ego, Dragoon. He promises Arthur that he’ll heal Uther if Arthur will see to it that magic users are allowed to be free. Arthur agrees and says he’ll meet him at nightfall at Camelot. Once in Uther’s chambers, things go pretty well, until Morgana’s lucky charm kicks in and kills Uther. 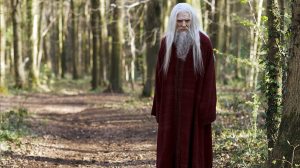 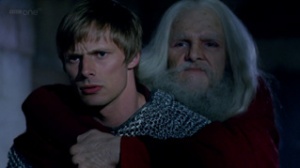 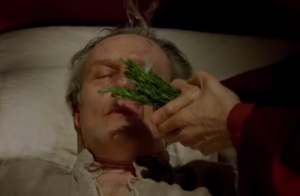 Arthur is beside himself and thinks that Dragoon killed his father on purpose. Gaius and Merlin realize that it was Morgana, but it’s too late. Uther is dead and Arthur is convinced all magic is evil. Arthur sits vigil with his father’s body all night and Merlin sits outside that chamber waiting for Arthur all night because he didn’t want him to feel alone. 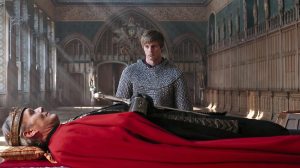 Later, in an emotionally satisfying ceremony, Arthur is crowned King of Camelot. And I may or may not have gotten a bit teary. 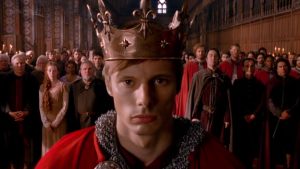 1.)  If I’d written this episode…I would have at least let the audience know about the fate of the rest of the performers. Their leader tried to kill the prince and did kill the king. We know at least one of them was in on it with the leader. Were the rest? Were they all killed? Did they escape? What happened? I know it’s a little thing, but I want to know.

2.) The thing I loved/hated most about this episode. Hated: how insanely sleezey Agravain is toward Morgana. I also felt so bad for Merlin – he really thought he was going to fix everything and ended up hurting his best friend. Loved: I loved the way Merlin stayed up all night keeping vigil for Arthur while Arthur kept vigil for Uther. And how touched Arthur was that his friend had been there for him.

And I also love the following. This requires a little background – if you missed last week’s episode, the Cailleach told Morgana that Emrys was her destiny and her doom.  So I freaking loved that this happened. Ms. Morgana Pendragon tweeted the Merlin Club. Read from the bottom up. Strangely, there’s been no response. 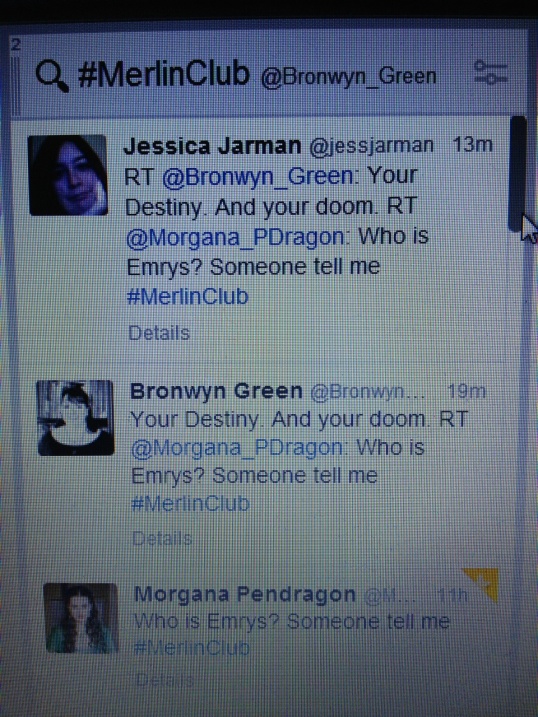 3.) Something you never noticed about this episode before. How many different crowns they have in Camelot. Uther had several. Arthur’s now got something completely different. Crowns everywhere. 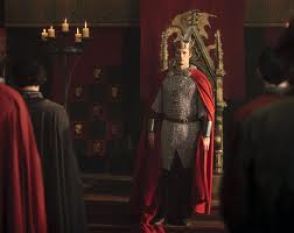 5.) Here is some proof of some random head canon I’ve created. I’ve got nothing this week.

6.) What Merthur moment did Jess have the naughtiest thoughts about? I don’t think they were naughty thoughts. I think they were tender feels when Merlin stayed up all night with Arthur to be there if Arthur needed him and how moved Arthur was when he realized Merlin had done that.

7.) What made Jen lose her shit  – in a good or bad way? Uther’s far too late attempt to be a decent parent.

Here’s Jess‘ take on the episode, and here’s Jen’s.

0 thoughts on “Merlin Club: The Wicked Day or Finally. It’s way past time Uther bit it.”