In this episode, we have a former student of Gaius’ breaking…well, sneaking into the druid’s cave to steal a third of the the super secret sacred Triskelion shaped key of some dead sorcerer king type dude. (I know…that’s a wildly useful description.) The druids are all, this will do you no good, you don’t know where the last third is. But the guy…and the entire audience all know where it is. It’s in Camelot’s vaults, of course. Where the hell else would it be? 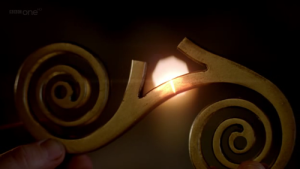 So Julius sneaks into Camelot and goes to Gaius to ask for his help to get into the vault. And then they do the thing I hate most of all. Those guys have a stupid expository dialogue exchange. And through this expository dialogue that they’ve already admitted that they both know, we (and Merlin who’s creeping by the door) find out that supposedly in this dead wizard dude’s castle, there’s a dragon egg and dragon eggs can survive for centuries prior to hatching. Gaius gets pissy, refuses to help and sends Julius on his way. 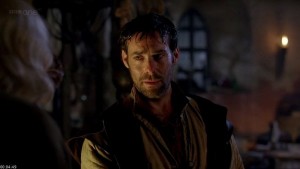 Merlin wants nothing more than to help Julius and liberate the egg. Gaius tells him that the egg is fine and Julius isn’t to be trusted. Merlin flies in the face of this sound advice, contacts the dude and promises to help him get into the vault beneath Camelot.

Merlin sneaks into Arthur’s room while he’s sleeping and tries to get the keys. Arthur wakes up, so Merlin pretends to be looking for worms in the wood. Later, during a council meeting, Merlin magically makes Arthur’s pants fall down and he oh, so helpfully, attacks his king to help him pull them up. And thus ensues one of my favorite scenes in the entire series. 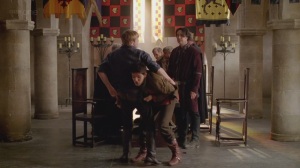 Merlin gets the key to the vault and he and Julius sneak down and grab the last third of the key and it melds together. On the way out, Julius proves just how untrustworthy he is and knocks out Merlin, leaving him to take the fall. Merlin wakes up the following morning and quickly gets the key back to Arthur’s room, nearly waking Arthur up in the process when Merlin knocks over a goblet and has to crawl over Arthur to catch it (magically, of course) before it hits the floor. 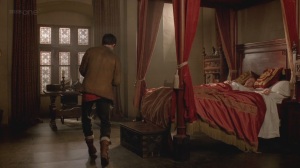 Arthur wakes up and Merlin again pretends to be checking for worms in the wood. Just as Arthur is questioning Merlin’s sanity, the bells ring and the theft has been discovered. Which begs the question of how. There was no obvious break in. In fact, it was supposed that the culprit had a key. So how do they know that anything is missing? Do they do a morning check of every last magical trinket in the vaults? (If I missed something in the ep, please let me know because this is driving me crazy.)

Anyway, Gaius tells them what exactly was stolen and why, because Gaius is apparently super helpful at Merlin’s expense. Arthur declares that they have to stop the thief and the dragon egg must be destroyed. Because dragons = bad.

So Arthur, the knights and Merlin ride off to follow Julius and there’s a lot of Arthur and the knights being douchey at Merlin during the trip – just picking at him and lording their status over him not letting him eat, making him do all the work – in a lighthearted way, of course. See? Douchey.

They finally catch up with Julius and have a little skirmish with him and his crossbow and despite the fact that Merlin breaks the crossbow (with Magic) Julius gets away. He shows up later and slingshots a poultice in the knights’ stew while Merlin’s back is turned and when Merlin is done with his chores, he comes back to find all of the knights passed out. 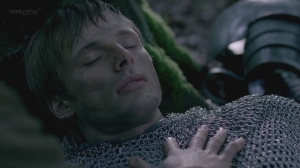 He finds the poultice and quickly surmises what happened and goes after Julius. He catches up and warns the other man right before the dude gets sprayed in the face with some sort of poison mist. Merlin steps over him and makes his way to the eggs. Julius wakes up and comes after him and they fight. Merlin wins, hides the egg in his pouch and escapes as the wizard’s tower begins crumbling to the ground. 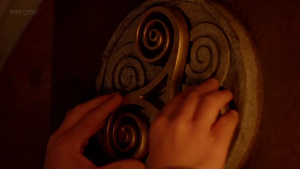 He runs into Arthur and the knights as the whole thing crashes to the ground and convinces Arthur that Julius and the egg were still inside, so everything is awesome. They all return to Camelot where Merlin gleefully shows Gaius the egg. He then takes the egg to Kilgaragh and using his Dragon Lord voice, helps birth the baby dragon, naming it Aithusa. This scene results in two things: Jess’ panties falling off and uncontrollable squeeing from me because OMGCUTEBABYDRAGON. Not enough time was spent on this tiny bit of adorableness.

Okay, so the questions.

1.)  If I’d written this episode…I would have at least let the audience know how they knew there was a break in at Camelot.

2.) The thing I loved/hated most about this episode. Hated: How dickish the knights were to Merlin. Also the expository dialogue. Loved: Merlin and Arthur pantless wrestling, and THE BABY DRAGON!!!

3.) Something you never noticed about this episode before. The expressions on Agravaine’s face during the pants wrestling scene.

5.) Here is some proof of some random head canon I’ve created. I didn’t create it, but Merthur is clearly a thing that is happening.

6.) What Merthur moment did Jess have the naughtiest thoughts about? Without a doubt, Merlin and Arthur pantless wrestling.

7.) What made Jen lose her shit  – in a good or bad way? Not enough baby dragon. Also? Merlin and Arthur pantless wrestling.

Here’s Jess‘ take on the episode, and here’s Jen’s.

0 thoughts on “Merlin Club: Aithusa or The One Where Baby Dragon Cams Should Be a Thing”

Look how flipping adorable my mama is! She dressed

Look at this beauty! One of my uncles inherited my

I hate being bored, and recovery is booooooring. A

A few weeks ago, I finally got around to making ma