Today, I’ve got the fantabulous Janine Ashbless on the blog, and I’m questioning her mercilessly interviewing her about her life in general, and her brand new release.

“Broad at the shoulders and lean at the hips, six foot-and-then-something of ropey muscle, he looks like a Spartan god who got lost in a thrift store. He moves like ink through water. And his eyes, when you get a good look at them, are silver. Not gray. Silver. You might take their inhuman shine for fancy contact lenses. You’d be wrong.”

Before we get to more of this amazing-sounding book, we’re going to find out a little more about Janine Ashbless – thanks to my nosy intrepid questions. But first off, Janine–in her own words.

Janine Ashbless is a writer of fantasy erotica and steamy romantic adventure. She likes to write about magic and myth and mystery, dangerous power dynamics, borderline terror, and the not-quite-human.

Janine has been seeing her books in print ever since 2000. She’s also had numerous short stories published by Black Lace, Nexus, Cleis Press, Ravenous Romance, Harlequin Spice, Storm Moon, Xcite, Mischief Books, and Ellora’s Cave among others. She is co-editor of the nerd erotica anthology ‘Geek Love’.

Born in Wales, Janine now lives in the North of England with her husband and two rescued greyhounds. She has worked as a cleaner, library assistant, computer programmer, local government tree officer, and – for five years of muddy feet and shouting – as a full-time costumed Viking. Janine loves goatee beards, ancient ruins, minotaurs, trees, mummies, having her cake and eating it, and holidaying in countries with really bad public sewerage.

Her work has been described as:

“Hardcore and literate” (Madeline Moore) and “Vivid and tempestuous and dangerous, and bursting with sacrifice, death and love.” (Portia Da Costa

A losing battle with my laziness.

Do you have any collections?

Do you have any hobbies?

I own a small wood, so I like to work in that with my chainsaw. I play Dungeons and Dragons. I LARP – dress up like a fantasy warrior and run around hitting orcs with rubber swords.

Do you have any bad habits?

See LARPing above. My parents are still waiting for me to grow out of it!

I wish I’d been taught Latin. It would be so cool, in old churches and museums, to be able to read the stones.

What sound do you love?

What sound do you hate?

Dog – I always have at least two.

Get things done early or procrastinate?

Falling in love/lust with my heroes and having wild fictional affairs!

What was your favorite childhood book?

The Dark is Rising by Susan Cooper. I wanted to be an Old One.

(*Bron wiggles and interrupts* Yes! I loved this series!)

Questions about the book.

In Bonds of the Earth is the second story in the Book of the Watchers series and sequel to Cover Him with Darkness. In Bonds of the Earth continues Milja and Azazel’s story. Were there any significant differences in your approach to the two books and your experience writing them?

They were both lovely, exciting books to write, but there were slight differences in my approach. I wrote the first book with an emphasis on a logical (if twisty-turny) plot that would be (if necessary) fairly self-contained. Milja triggers the action with her decision and then is mostly swept along in it.

The second book was about digging down into the motivations, conscious and unconscious, of the various individual protagonists and antagonists who are trying to do each other over. Milja gets a lot more agency; people are listening to her now. And it finishes on a cliff-hanger because by this point I’ve committed to the full trilogy.

She evolves from a simple rather geeky girl with all the right intentions into someone who recognizes her own darkness and strength and is much less afraid to harness it. And she turns out to be really kinky…

He’s so confused and confounded by human emotion – he really doesn’t get people. He has the dangerous innocence of a bull in a china shop.

Is there anything you hope readers take away from In the Bonds of the Earth?

Don’t put your faith in any dogma or any set of rules, or any one person no matter how wonderful they may seem. Think for yourselves!

If you were to cast your book as a movie, who would you choose to play your characters? (feel free to include pictures)

Azazel would be played by Aidan Turner:

Milja would be played by model Emina Cunmulaj: 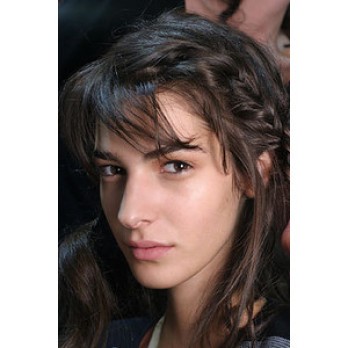 Egan would be played by Tom Wlaschiha: 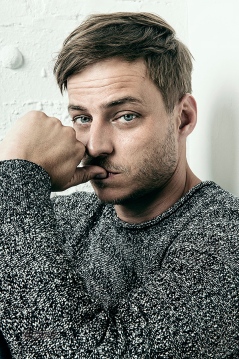 What’s up next for you—care to share a bit?

I’m finishing off the third in the trilogy – The Prison of the Angels – right now! I have an Apocalypse to stop!

Thanks for having me over, Bronwyn!

Thank you for being here!

And now, let’s have some more about the book!

When Milja Petak released the fallen angel Azazel from five thousand years of imprisonment, she did it out of love and pity. She found herself in a passionate sexual relationship beyond her imagining and control – the beloved plaything of a dark and furious demon who takes what he wants, when he wants, and submits to no restraint. But what she hasn’t bargained on is being drawn into his plan to free all his incarcerated brothers and wage a war against the Powers of Heaven.

As Azazel drags Milja across the globe in search of his fellow rebel angels, Milja fights to hold her own in a situation where every decision has dire consequences. Pursued by the loyal Archangels, she is forced to make alliances with those she cannot trust: the mysterious Roshana Veisi, who has designs of her own upon Azazel; and Egan Kansky, special forces agent of the Vatican – the man who once saved then betrayed her, who loves her, and who will do anything he can to imprison Azazel for all eternity.

Torn every way by love, by conflicting loyalties and by her own passions, Milja finds that she too is changing – and that she must do things she could not previously have dreamt of in order to save those who matter to her.

In Bonds of the Earth is the second in the Book of the Watchers trilogy and the sequel to Cover Him With Darkness.

I was giving my long-dreaded presentation on the anniversary footbridge to Misters Ellis, Singh, Constanzo and Mackenzie…when Azazel walked in.

“Excuse me, gentlemen,” I said loudly, lurching around from behind my desk, grabbing Azazel’s arm and spinning him back to face the door. “Not here, come on, please,” I implored through clenched teeth.

If there was one thing I’d learned by then, it was to not ignore warning dreams. If I’d paid them more attention from the start, things between me and Egan might have gone very differently back in Montenegro…

No, better not to think of Egan, not when Azazel was around. One guy at a time was quite enough to wrap my head around. Especially this guy.

He humored me though, this time, letting me pull him out of the meeting room and through the open plan office without resistance. We attracted a lot of stares, but there was nothing I could do about that except hold my head high.

“Where are we going?” he asked.

I didn’t need to glance up at his wicked smirk. I could feel it burning its way into my breast.

Bryce, the beardy guy in my new team who’d shown me the ropes of the job and seemed just a tiny bit too eager to talk every morning, stood up from his cubicle to intercept us. “Milja, is everything okay?”

“She’s insatiable,” my demon lover confided with a helpless shrug to my colleague as we swept past.

“Goddamnit,” I muttered, and Azazel chuckled.

Sometimes it was hard to remember that he’d risked everything to save me.

We reached the doors at the end of the room and I pushed through, past the lobby with the elevators and into the concrete stairwell of the emergency stairs beyond. The only people who came here were smokers on their way to the roof, and it looked empty for now. My panicky momentum fizzled away and I swung to face him.

“What are you doing here?”

“What do you think?” he countered, taking my face in his hands.

“Azazel—” But he cut off my protests with his hungry kiss; a kiss that lanced through me all the way to my core. I gave up resisting, and speaking, and almost breathing, as his lust rolled over me in a hot wet wave. I slid my hands around his neck and tangled my fingers in his messy hair, pulling myself into his embrace. His body was hard as rock, his hands heavy on my waist and hips. The yearning for his touch that smoldered in my flesh day and night woke to a roaring heat.

I’d missed him. His skin, his smile, the peppery scent and salt taste of him. The sweetness of his lips and the harsh rasp of his stubbled chin. I’d missed him so much—like an addict missing her hit.