I feel like the story I’m about to tell you is some kind of karmic retribution for inadvertently terrifying Jenny Trout’s young daughter last Christmas. I was told by a reliable source (Jen’s cousin D-Rock) that Jen’s daughter, Wednesday, would be gone the day I wanted to fire the latest salvo in my and Jen’s ongoing Weeping Angel War. My reliable source was not at all reliable and I ended up scaring a six year old child with the weeping angel tree topper I’d arranged for Jen’s tree instead of Jen.

So, back to my kid. Killian, lovely child that she is, likes to send me random texts.  Sometimes, it’s creepy birds that have been photoshopped with human arms in place of their wings. Sometimes it’s this creepy dog over and over and over. 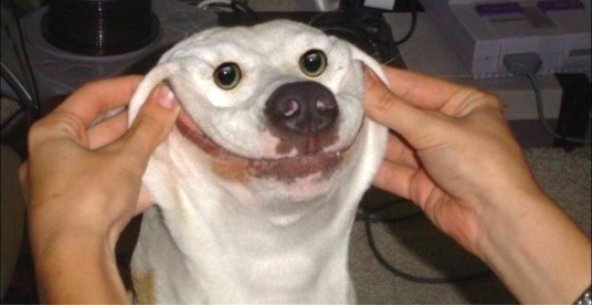 Last week, Wednesday, I was getting ready to go see the lovely Kayleigh Jones, and I stumbled downstairs at 7am to discover that Killian was still awake and on her computer skyping with someone. I opened up the medicine cabinet and screamed because this was in there and it startled me. 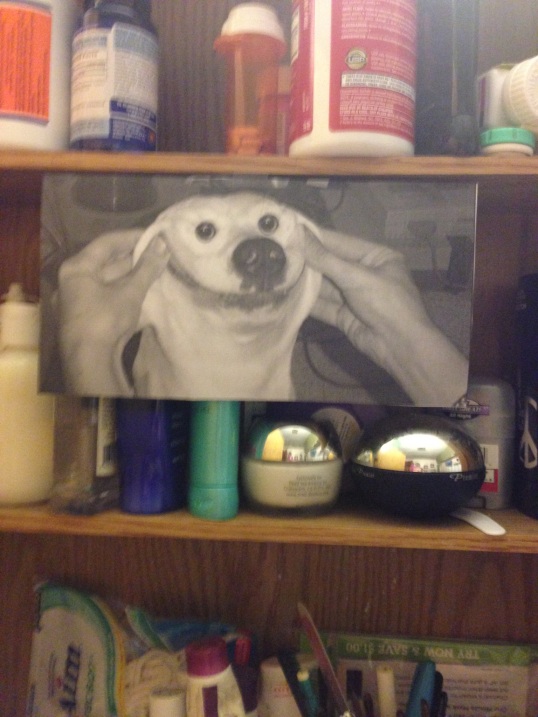 Cue wild, maniacally giggling from my child. I stalked out to the living room and opened my computer to find this: 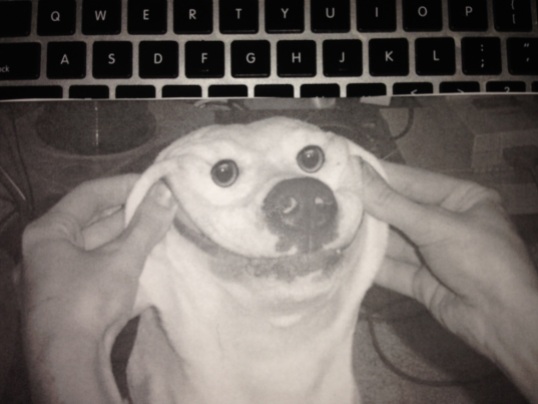 I may have called her a “little shit” which only set off more maniacal giggling. Then, I looked at my phone. Now…I have no idea whose number this is. None. 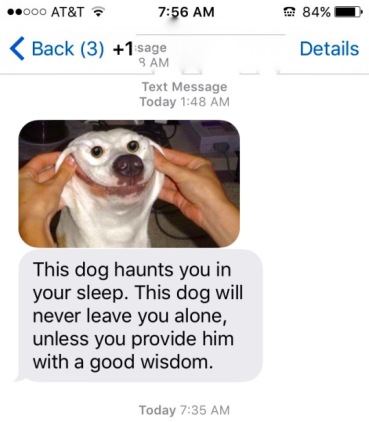 I brought the phone to Killian and demanded to know who the hell was sending me creepy dog messages at nearly 2am. This resulted in gales of unbridled laughter and tears from laughing so hard. I may have threatened to stab whoever it was in the face. The person Killian was skyping with may have heard me and may have asked to see the knife I was planning on harming him/her/them with. I may have complied. 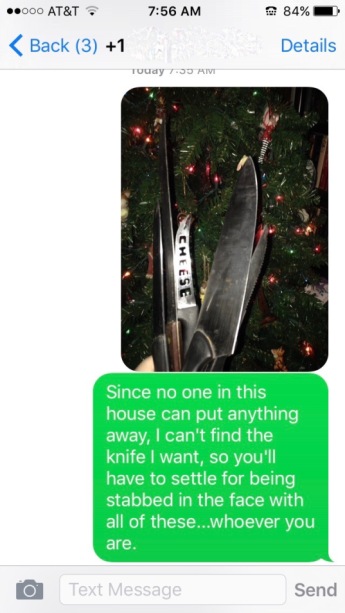 What…? Creepy dog makes me crabby. 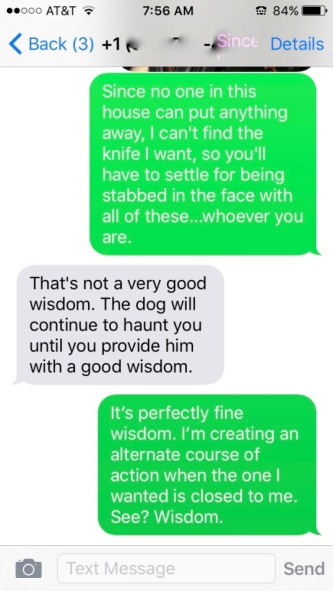 So Killian decides that it’s probably time to go to bed, you know…being after 8am and all. So she comes out to the living room to give me a hug, and I reach out to hug her, and I spot this on the archway between the living room and dining room. 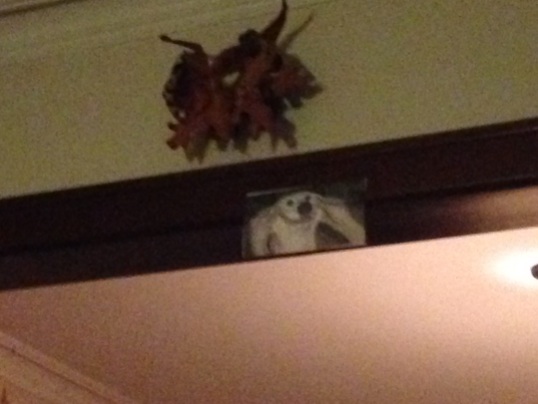 I may have called her other, various unfortunate names. This only made her laugh harder. I’m pretty sure she giggled herself to sleep that day.

So, I finished getting ready to go see Kayleigh, and I found this on my steering wheel. 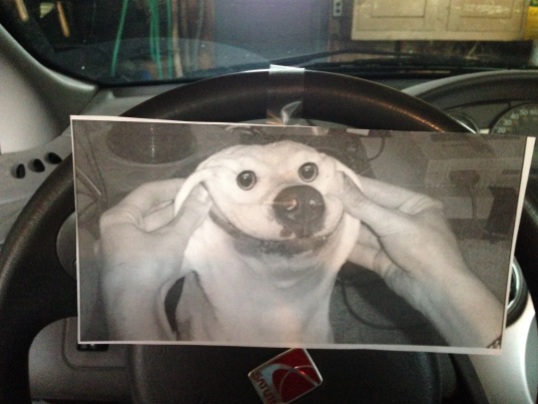 Then I reached into my purse and found this: 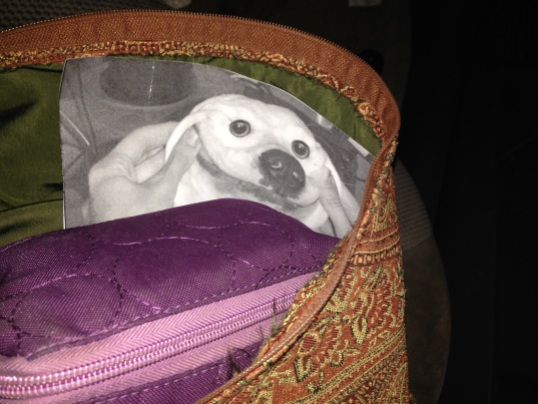 Later, when I got home, I found this: 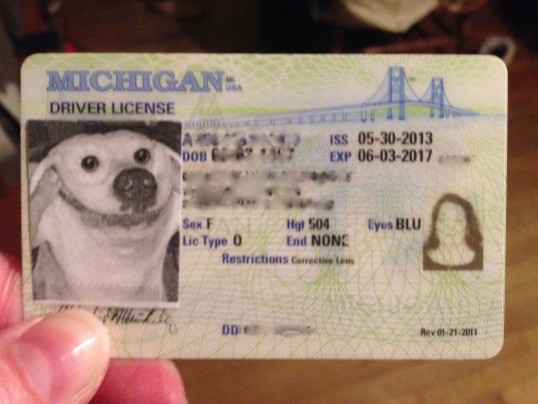 I thought that was the end of it. I really did. In fact, she promised that there were no more creepy dog pictures for me to find.

On Christmas morning, I stuck my hand in a gift bag and pulled this out. 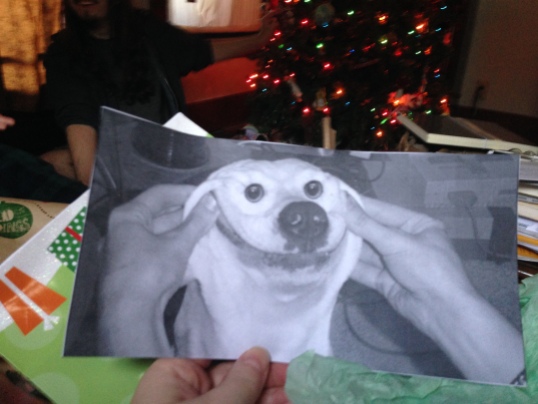 I could not stop laughing. There were tears. So many tears. Then she told me to turn it over. 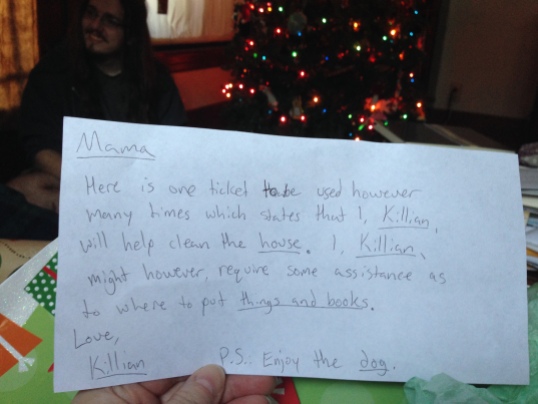 This is the kid I have, and I wouldn’t trade her for anything. She’s freaking fantastic – creepy dog and all.

EDIT: Oh, and there’s an update.

23 thoughts on “My kid is kind of a jerk. A hilarious, hilarious jerk.”