I’ve been busy, busy, busy. It’s amazing what getting rid of a bunch of negativity and stress can do for one’s productivity!

But I wanted to share my shiny new cover for my upcoming release, Out of Sync. It’s the 5th book in my and Jess Jarman’s Bound series, and the lovely Kris Norris made the gorgeous cover. It’ll be out in a few weeks. 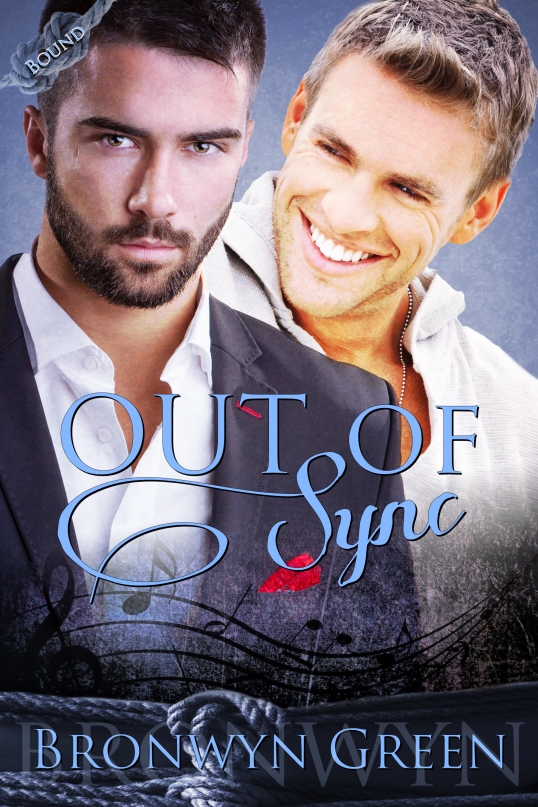 Ten years ago, Morgan Weaver walked away from everything he loved—his burgeoning career as a composer, his cello, and his best friend, James. Family obligations and guilt keep him tied to a job he hates, and his dreams have collected even more dust than his instrument.

James Shepherd was left reeling when Morgan abandoned not only their dreams of writing and performing together, but their friendship. James forged on to become an internationally known musician, but he’s always felt Morgan’s loss and has never been able to shake the feeling that he’s responsible for the other man’s choice to leave everything behind.

A simple request from Morgan’s sister brings the men together in a way neither of them expected, and long-denied desire bubbles to the surface overwhelming them both. Knowing it’s only temporary, Morgan finds himself lost in a haze of submission, finally able to experience being at James’ mercy and determined to enjoy it while it lasts. James, however, has other plans and is equally determined to show Morgan he can have all he’s ever wanted—including what they have together.

James stared at Morgan. His wide gaze kept darting between James’ eyes and his lips, and his expression bordered on desperation and need. It was a much better look than he’d had earlier. He only seen Morgan that defeated one other time, and he refused to let it happen again—not if he could stop it.

He tightened his fingers in Morgan’s silky curls and tugged back his head. Giving Morgan all the time in the world to stop him, James slowly lowered his face, but once he touched Morgan’s lips, he was fucking lost. They parted on a gasp, and James wasn’t sure if it was the need for more air or to speak. All he knew, was that Morgan’s mouth was open, and he was sweeping inside, tasting the smooth sting of scotch and the warmth of the man he’d never stopped wanting.

Morgan’s fingers clenched on James’ arms, but he didn’t push James away. Instead, he just hung on. James slid his other arm around Morgan’s waist, and pulled their hips flush together. The groan that that escaped Morgan’s lips as their hard cocks ground against each other was the most delicious thing James had ever tasted.

Anger and lust slammed together, and he kissed Morgan harder, deeper, walking him backward until his back was against the wall. When he’d come home and found Morgan dozing on the couch with his computer open and empty glass of scotch, he’d lost it. He’d thought he was getting through to the other man—helping to pull him out of his self-imposed corporate prison. But leave him alone for one night, and he was right back fucking to it.

And the way Morgan had snapped back had sent James’ emotions careening everywhere. Pride in the fact that Morgan had stood up for himself. Arousal that mixed weirdly with that pride. Worry for whatever had set him off in the first place, because he knew that as explosively angry as Morgan had been, it hadn’t been directed at James—not all of it anyway. And concern that this man that he cared about was going to continue to trade his happiness for a life of misery and servitude. All of his emotions twisted together until the only action that seemed remotely sensible was to kiss Morgan like he’d been dying to since James had shown up his office less than a week ago.

He trailed his lips down the side of Morgan’s neck, nipping with his teeth, drawing little shudders out of the man. His fingers convulsed on James’ arms, and every little bite drew Morgan’s hips forward in sharp little jerks.

He trailed his lips up to Morgan’s ear then sucked the lobe between his lips and flicked at it with the tip of his tongue before releasing him. “I’m doing what you told me to.”

“What…I—” his sentence ended on a gasp as James raked his teeth over that same bit of flesh.

James drew back a bit so he could look into Morgan’s eyes. His pupils had practically swallowed the warm brown of his irises. He dragged the pad of his thumb across Morgan’s full bottom lip. “You told me to do what I wanted, remember?”

He nodded, somehow managing to appear both desperately aroused and ready to bolt at the same time.

“So that’s what I’m doing.” James chuckled quietly as he tilted his head back and forth as he considered his next words. “Well, maybe not exactly what I want.”

“No?” Morgan’s voice came out rusty, like he rarely spoke.

“Well, you’re not tied up and naked, and I’m not finding out all the pretty shades of pink your arse can turn.”

Morgan’s eyes dilated a little further, and his breath caught, his chest lifting and holding tight against James’.

“Nor is my prick buried balls deep inside you, so…no. I’m not doing quite what I want. Not yet.”

“But, I’m not going to do any of those things.” James thrust against Morgan, unable to keep his hips still.

Morgan thrust back, clearly needing more than James was giving him. “You’re not?”

James leaned forward and nipped the other man’s lower lip, pulling back slightly before releasing it. “Not yet.”

“When?” the other man choked out.

“Here’s the thing, Morgs…if this is going to make you run from me like it did last time…” His voice cracked a little on that last word as ten years’ worth of guilt choked him. “Make you run from the things that are most important to you, it’s not happening. Not now, not ever.”

James sobered. “If all I ever am to you is your friend, I’d rather have that, than tonight…no matter how fucking hot I know it would be.”

Morgan met his gaze and James couldn’t look away if he wanted to.

“I’m not looking to pick out china patterns with you—you don’t need to worry about that,” James rushed to say. “But no matter how hard I want to make you come…no matter how badly I want to feel your mouth around my cock, I’m not willing to be the cause of not seeing you again for another ten years.”

Morgan fisted the front of James’ shirt. “When’d you get so fucking noble?” Without waiting for an answer, he yanked James forward and captured his lips, pushing inside and taking his mouth as thoroughly as James had claimed his moments before.

3 thoughts on “Cover Reveal for Out of Sync!”

A little over 24 years ago, I met this woman when

#TBT to when my son made his own detective license

In theory, this mandala/compass rose fabric will b

I got mystery mail today! I have no idea who sent

I made some amazing souvlaki last night. I wish we

My gorgeous baby girl donated ten inches of hair a

Who wore it better? 😂😂😂 #starwars #tuske

Kitsune is expressing her independence by lounging

Willow tried to use her furry cuteness against me

I miss my lake already. Pretty sure my soul is mos

Lake Superior sunset on the west side of the Kewee