This is going to be a real quick rundown because it’s the morning this post goes live, and I have a metric fuckton of client edits on my plate and a book of my own that needs finishing, so quick and dirty – not unlike Rome, itself.

Things are continuing to spiral horribly out of control. I feel like I’m watching a train wreck now, and that nothing good will ever happen for any of these people ever again.

Vorenus, who’s now completely hardened and embittered, is still having nightmares about Niobe dying and ruling the Aventine like a proper son of Hades and he’s got no patience for one of the captains who comes in to bitch about a guy who paid his nephew for oral sex. Vorenus is like…the kid was paid, so no harm, no foul. Pullo thinks it’s a problem and contradicts him in front of the other thugs and Vorenus is furious with him for undermining his authority. A short while later, the man who paid the thug’s nephew for a blow job is brought to Vorenus, bleeding heavily, just having been castrated by the thug’s crew, and his wife demands retribution.

Vorenus is not pleased and tells Pullo to disrespect that guy as he’s disrespected Vorenus, but Pullo refuses because he’s afraid of starting a gang war in the Aventine, so Vorenus sends someone else. Vorenus and Pullo argue about it and Pullo is begging for Vorenus to trust him after all the times he’s saved him and he let’s it slip that he killed Evander on Vorenus’ behalf and Vorenus loses his damn mind because Pullo knew that Niobe had been having an affair and didn’t tell him. They fight and Pullo leaves.

Octavia is hanging out and smoking weed with her new friend, Jocasta (anyone know if this is meant to be Oedipus’ mother/wife?), and Atia’s annoyed that they’re doing it in the house. (Things really do stay the same!) And while Atia joins them, Jocasta bitches about how ghastly Macedonia is and Atia later tells Antony that Macedonia is the literal worst and tells him that if they’re all the way out there Antony will lose his power.

Antony says he he just wants to live in peace, but this doesn’t stop him from visiting Cicero and demanding that he gets appointed to Gaul instead, whilst being a super special houseguest and pissing in Cicero’s potted plant. Oh, and he also threatens to pour molten gold down Cicero’s throat if he doesn’t get Gaul.

Brutus and Cassius are in a foreign country trying to raise an army to take back Rome. Brutus is drunk and bitter and things are not working out at all like he’d planned. The next day, he comes to either a river or a lake, strips off and wanders into the water and prays and appears to be ritually cleansing/baptising himself, but maybe he’s just still drunk. Not really sure there. 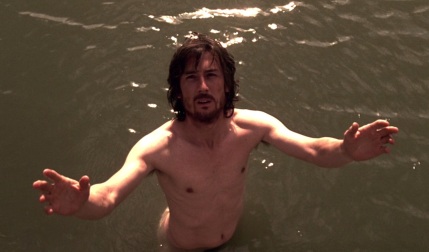 Octavia is hanging out, playing the lyre, like you so when you’re bored nobility in Rome and a visitor to the house is clearly quite smitten with her. The visitor, Agrippa, is Octavian’s friend and brings a message from Octavian. Octavia is equally smitten with him. Agrippa delivers his message, chats a bit with Octavia and Atia is rude to him as usual then sends a messenger to tell Antony the enemy is in town and he should probably kill him.

Back at the Aventine, the thug who castrated the the one guy is raped under the orders of Vorenus. Pullo goes to the brothel to apologize to Vorenus and they find the rapist dead in Vorenus’ office. Pullo asks for forgiveness and Vorenus accuses him of having an affair with Niobe, too. Pullo denies it, Vorenus doesn’t believe him, they have the mother of all fights and end up crashing through Vorenus’ office wall and into the brothel below. Finally, Pullo is like “fuck it, I’m out” and leaves Vorenus bleeding and crying on the floor and Pullo and Eriene leave Rome. 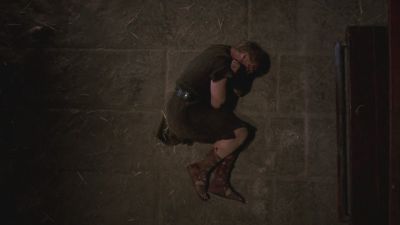 One of Atia’s servants, Durro? Duro? shows up at Servilia’s place and Servilia wants to know why the hell Atia is still alive. So apparently, he’s an assassin. He says he could do it quicker if he could kill Octavia, too, but Servilia won’t let him do that. He demands more money because the job is taking longer, and he also demands a kiss from Servilia. 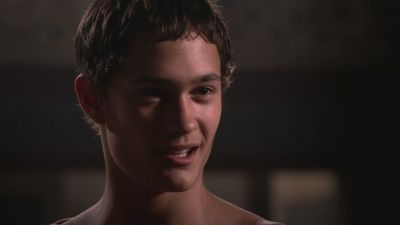 Lyde (Niobe’s sister) and Vorenus’ kids are miserable and locked in a dark room – or maybe it’s just the slave wagon, still. It was pretty dark. Anyway, Lyde escapes, but isn’t able to take the children with her and runs off into the night. 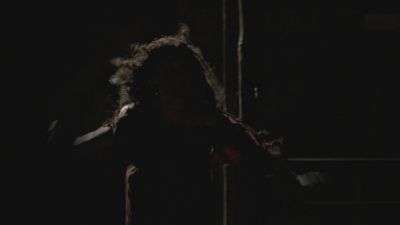 At the Senate, Antony is anticipating hearing that he’s been appointed to Gaul, but Cicero is absent and has some other dude read his message aloud to Antony in front of the Senate. It’s clear that this guy didn’t read the note before hand. If I had, I can only assume he would have declined and left the country. Basically, Cicero rips Antony a new one, and as other Senate members start filing out, Antony is becoming more enraged by the second and eventually kills the messenger with the scroll on a stick thing. There’s a cut to Cicero who’s in a litter on his way out of Rome and is dictating an Antony-related message to his slave/assistant. 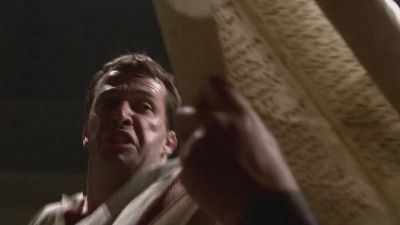 After three months away, Pullo and Eriene return to Rome to find the Aventine pretty much destroyed. He’s returned to try to make amends to Vorenus only to find that he’s joined Marc Antony’s army (again) and is off waging war somewhere. While he tries to figure out what to do next, Lyde comes running up to him and tells him the kids are still alive and we next see him galloping down the road at breakneck speed, presumably to rescue the children.

Back at Atia’s, the assassin is in the kitchen and adding poison to the stew while the kitchen slave is attempting to serve Atia something that she doesn’t want. When she returns, the assassin helps ladle out the soup into a tureen, and the last shot of the episode is the servant carrying the tureen out to the dining room.

And now, the questions.

Hmm…probably Antony pissing in the plant and also the look on his face as that dude read the scathing letter to him.

So many things not to like, sexual assault, mutilation, Vorenus truly believing Pullo had slept with his wife…

Servilia’s green dress. But really, there were a lot of great dresses in this ep.

Team Atia or Team Servilia, and why:

Boy…I don’t even know. There’s part of me that’s feeling a little bad for Atia. She’s lost her son, she’s lost her power…I mean, she’s still just awful, but shit’s crumbling. And props to Servilia for attempting to take out her arch nemesis.

There are a couple tonight.

And this made me snort:

Jess’ take on These Being the Words of Marcus Tillius Cicero.

Jen’s take on These Being the Words of Marcus Tillius Cicero.

2 thoughts on “Rome S02E03: These Being the Words of Marcus Tillius Cicero or The One Where Marc Antony Shows He’s an Awesome Houseguest by Pissing in a Potted Plant”

Look how flipping adorable my mama is! She dressed

Look at this beauty! One of my uncles inherited my

I hate being bored, and recovery is booooooring. A