The Aventine has gone to hell. Everyone is robbing everyone and beating the shit out of everyone and Vorenus is sitting in his bed staring at Erastes decaying head and grieving Niobe and the kids while Titus and Eriene take care of him.

Marc Antony is getting ready for Cleopatra’s arrival, listening to Atia complain, dodging every single question Octavian asks about his inheritance from Caesar, and being forced to deal with the complaints of Roman citizens.

Cleopatra shows up and brilliantly throws shade by claiming that she doesn’t remember meeting Marc Antony. She’s there to negotiate Roman protection in exchange for grain and to insist that her son publically claimed as Caesar’s and Antony apparently tries to trade sex for the paternity claim and Cleopatra slaps him. As she’s leaving she recognizes Pullo (who’s likely the actual father of her son) in the crowd.

Pullo is waiting to speak with Antony about helping Vorenus, and Antony goes to Vorenus’ place to tell him to shape the fuck up. After berating Vorenus, Antony puts him in charge of getting the Aventine under control.

Atia has yet another party where she’s clearly planning to have Servillia killed, but Octavian thwarts those plans by threatening to tell Antony, so Atia has to cancel her plan. Cleopatra and entourage shows up, Cleo opening flirts with Antony in front of Atia, and Atia wants her dead – as usual. 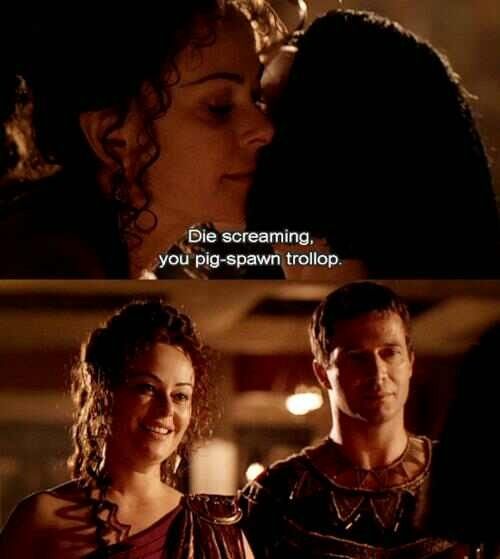 Vorenus calls a meeting of the crime lords fucking up the Aventine and while they’re under some sort of truce under the patron goddess of thieving, murdering rapists, he smashes her statue and declares himself the Son of Hades and intimidates them all into behaving themselves. Pullo’s worried that Vorenus is going to piss off the gods, but Vorenus figures they’ve already done their worst by taking his wife and kids. This is a man who has zero fucks to give.

Octavian demands his share of the inheritance to appease common people and when he doesn’t get it, borrows money from a money lender and Atia and Antony lose their damn minds and Antony beats the shit out of Octavian.

Timon, Atia’s faithful servant, discovers that his zealot brother Levi has left Jerusalem to stay with Timon and his wife and children.

Later, Octavian leaves to stay with his friend Agrippa and leaves Atia a I’m-running-away-from-home note. On his way out of town, they pass slavers, and in one of the wagons are Vorenus’ children – miserable, but very much alive.

And now, the questions.

I did rather enjoy Vorenus going off on the thugs. I enjoyed that a lot.

Seeing the kids in the slave wagon.

I can never find a decent picture of what I want, but I wish I was smaller chested so I could wear stuff like this in the summer.

Atia is still the literal worst at momming, but it was pretty ballsy of her to threaten a queen.

More of Pullo looking after Vorenus. I think she particularly enjoyed this bit.

Octavia coming into her own.

Jess’ take on Son of Hades.

Jen’s take on Son of Hades.

3 thoughts on “Rome S02E02: Son of Hades or The One Where Vorenus Finds Meaning in Life Running a Brothel and Intimidating Lesser Men”

As seen at the #homedepot on Alpine. Not sure if t

I was out and about this morning and met some fuzz

This weekend was unusual for me in that I didn’t