Vorenus and Pullo survive the storm that drowned most of the 13th Legion and end up on what basically amounts to a sandbar in the Aegean (I think, but I’m super bad at geography) Sea. 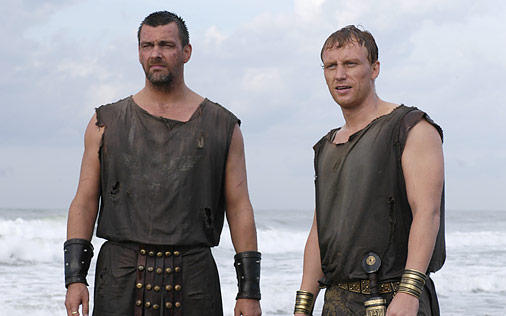 Meanwhile, Marc Antony and the scant few survivors of the 13th have made it to Caesar. Caesar’s troops are massively outnumbered by Pompey. Pompey wants to starve them out, but Cato the Whiner want to decimate Caesar and Pompey reluctantly goes to battle and gets utterly trounced by the side with nothing left to lose.

Brutus and Cicero defect and return to Caesar to throw themselves on his mercy. Caesar welcomes them back as old friends who’ve quarreled, but is disappointed that Pompey continues to stand against him.

Pompey, Cato the Whiner and that other dude, decide to take off for Africa, but they split up and travel separately, Pompey pretending to be a merchant and traveling with his family.

Pullo announces that he’s sure he’s seen Pompey before, Vorenus gives him the “shut the fuck up look” which Pullo ignores, and I immediately get this song from JCS stuck in my head for the rest of the episode.

Pompey denies it, of course, and Pullo eventually remembers who he is. The mercenary dude with the metal nose tries to talk Pullo and Vorenus into helping him take Pompey and his fam hostage for a reward from Caesar. Vorenus isn’t having his shit and runs his sword through the dude’s neck. Vorenus then announces that Pompey, his family and his guards are all prisoners of the 13th Legion. He eventually ends up taking pity on Pompey and lets him go while he and Pullo make their way back to Ceasar who’s crazy pissed that Vorenus took it upon himself to let Pompey go. Antony wants him punished and made an example of, but Caesar won’t do it because he doesn’t want to piss off whatever gods are protecting Pullo and Vorenus.

Meanwhile, back at Atia’s in Rome, she continues vying for her undisputed title of Mother of the Year by continuing to have Octavia do her bidding and checking in on Servillia to see how she’s getting on with her gift of the a large penis and the slave its attached to. And also, of course, to beg for guards for protection.

Octavia continues to regularly visit Servillia and in the course of comforting her when she hears that Pompey’s troops have been defeated, but the whereabouts of her son, Brutus are unknown, kisses Servillia and the two (presumably) have sex. (Good for them.). 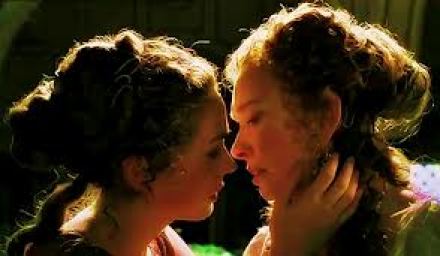 Pompey and family eventually make it to Africa, and Pompey, while welcomed to shore by someone who’d served under him in an earlier war, is killed by that same person in front of his wife and small children.

Pullo waxing poetic about finding his mother in the afterlife. That was actually incredibly sweet. Also, points for Octavia and Servillia having what seemed to be a fulfilling sexual experience.

Probably the raft made of dead bodies. That or Marc Antony being a pompous asshole.

The embroidery and beadwork on this is stunning. I also love the dress that goes with.

Servillia wins it this week. Why? She’s a mom who actually cares about her child and also seems to genuinely care for others – like Octavia.

I think that Jess feels that Pullo was more than a little turned on by Vorenus’ show of force when he killed that guide dude and declared that Pompey and his entourage were all prisoners of the 13th Legion.

When not even a toasty warm sun spot pleases the D

I LOVE getting soap mail from @alexkourvo!!! Look

I *finally* got my Halloween decorations up! (This

I just found this photo of me and my sister, Cait.

Throwing it waaaaaaaaay back to a little holiday s

My cute mama chatting with her youngest grandson w

Hubris, thy name is Bronwyn. Remember a few year

Willow would wish you a Happy Caturday, but she ha

Somehow, this gorgeous girl is the same age I was