There’s a lot going on in this episode, but I’m going to do my best to sum up.

Basically, Atia is continuing to be the schemeiest person who ever schemed and is wildly disappointed when she discovered that her teenaged son hadn’t  had sex with Caesar in the closet. She then sets him up with sword fighting lessons with Pullo.

She’s also super pissy because Caesar is spending more time with his mistress, Servilla, than he is with Atia. So she gets Servilla back by hiring someone to paint x-rated graffiti of Caesar and Servilla getting it on. Unfortunately, Caesar and his wife become laughingstocks when they’re out and about and everyone has seen the pictures. Caesar breaks up with Servilla for political reasons, they fight and Caesar beats the shit out of her to make his point.

Vorenus loses all the slaves he ordered except for one little boy who’s in a cage stroking the hair of his dead mother.  Now, Vorenus has no money to do anything else. He asks the moneylender about borrowing more cash, but the moneylender convinces him to work for him instead. Vorenus quickly figures out he’s working for the mob. He ends up quitting and going back to Marc Antony and asking if the offer was still open and rejoins the army in order to support his family.

Pullo asks Octavian for advice about Vorenus and Niobe since he suspects Niobe is cheating on Vorenus. Together Pullo and Octavian kidnap Niobe’s brother-in-law and baby daddy, get him to confess by torturing him, and then they kill him.

Servilla curses both Caesar and Atia in epic fashion and Caesar goes after Pompey only to discover that they’ve all retreated across the sea – to Greece, I think.

Servilla cursing Caesar and Atia. It was brilliant. And also well deserved.

The little boy stroking the hair and face of his dead mother. That was awful. 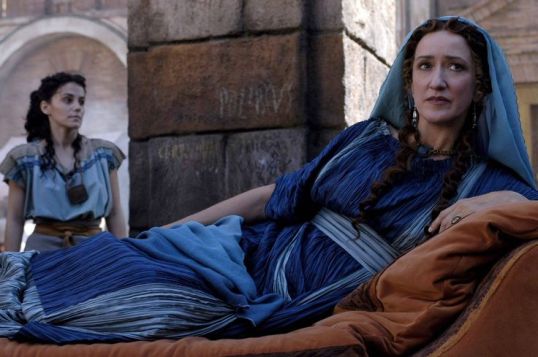 Usually, I’m all about Atia, but holy shit, Servilla brought her A game in this episode. Her cursing of Caesar and Atia was nothing short of glorious.

When Vorenus went to Marc Antony to beg for his job back. In Jess’ head, he had to work a lot harder.

The fact that the title of the show showed up in dialogue. She seriously loves when that happens in a show or a book. It makes her super happy, and I think it’s adorable. See?

Jen’s take on The Ram Has Touched the Wall (Actually, Jen won’t have a post this week due to unavoidable circumstances.)

How do you start your mornings? Do you have any mo

Look at this stunning journal my girl, @tibbyarmst

Thanks to a brutal migraine, I pretty much slept t

The Dowager Duchess would wish you a Happy Caturda

When you realize your skirt matches your reading m

A few weeks ago, my husband and I were driving to

May the 4th be with you. (Post is a bit lengthy.

I wish smell-o-vision was a thing, because my lila

I made some new curtains today. #sewing #sewingp

Like a lot of people with ADHD, papers are my neme

I have a lot of jewelry. Like a metric crapton. Wh

Almost forgot to share! Who wears way too much j

I replaced the zipper in one of my brothers’ fav

Happy Earth Day with a side of #TBT I’m throwing

One of the things I inherited from my Uncle Hap is