Okay, so our guy Caesar sends Marc Antony who’s now the Tribune…or maybe it’s the Tribute…(either way, he’s not volunteering to save his sister or anyone else, he’s in this for himself, and you know, Caesar) to Rome. As Tribune/Tribute, he now has veto power in the senate.

A pile of Roman centurions accompany him including Vorenus, Titus, and Octavian along with some shepherdess raping asshole.  Vorenus and Titus accompany Octavian back to his mother, Atia, who hugs him and basically says, “Never let us speak of this horrible, terrible trauma that befell you. Let’s just go ahead and pretend it never happened.”

She disdainfully dismisses Vorenus and Titus, but Octavian insists they dine with the family as equals having saved his life and all that. During the meal, you can watch Atia clearly calculate how she can best make use of them and we learn that Vorenus and Titus have completely different religious/political philosophies. Basically, if Caesar gets uppity and challenges Catonian law that leaves nobles with all the power by marching on Rome, Vorenus is out. However, Titus is totally in to return the power to the people. Finally, Vorenus finally begs off to go see his wife that he hasn’t seen in eight years. And Titus, he’s going to go get laid, drink heavily and gamble.

When Vorenus finds his wife, Niobe, she’s in the market holding an infant. He demands to know whose baby she’s holding and calls her a whore. Now, up until this point, I’d really liked that he’d been faithful to his wife even though he hadn’t seen her for 8 years. I thought that was a guy who really loved his wife. But then, he immediately starts with complete asshole behavior.

Also, Niobe was told that he was dead. She’d even stopped receiving his pay, so c’mon, what is she supposed to think. So his demands to know whose baby she’s holding and she tells him it’s his grandson, and he’s all horrified and she points out that their daughter is 14. Dude, you’ve been gone for 8 years. (I mean, yeah, 14 is young, but ancient Rome and all that.)

Vorenus dumps out a bag full of money and gems and cocks from statues and basically says, “Sucks that you and the girls were living in abject poverty, but here, now there’s money and you can get a lot for these cocks.”

Marc Antony goes and has loud screamy sex with Atia where her children can hear. Octavia is especially annoyed because she wanted to get back together with the husband Atia made her divorce in the last episode, but Atia said nope and sent him away.

Meanwhile, Titus goes and finds himself a prostitute and takes care of his most pressing need. Then, he gets good and drunk and loses all his money gambling, and realizes that the guy he’d been playing had been cheating him with weighted dice. So, he does what any hot-headed centurion would do and stabs the guy through the throat.  The guy’s partner/dad/someone is devastated and an insta-brawl ensues. Everyone is fighting and dying and the whole place is on fire. Titus gets injured and makes his way back to Vorenus’ house. 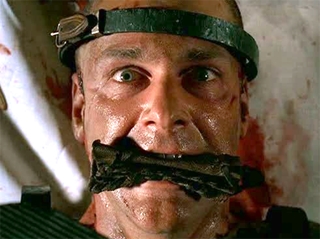 Niobe doesn’t want Titus in there because she doesn’t want someone dying in her house and Vorenus hollers at her to get a doctor. Titus looks like he’s possibly having a seizure from a head injury, but I’m pretty sure that the doctor feels he’s purging a malignancy. (I’m not exactly sure here since this is when my cat decided to stand up and paw at the TV.) Vorenus helps hold down Titus while a doctor augurs into his skull and my husband cringes on the couch. (The cat politely moved so hubs could see that part.) Titus calms down then passes out and spends some time sleeping off ancient amateur brain surgery at Vorenus’ place. 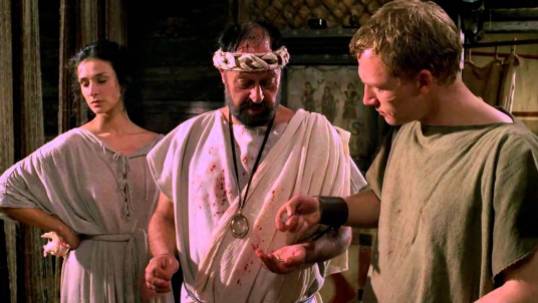 Niobe and Vorenus have a fight while she’s cleaning up all the blood and she’s pissed because he’s leaving her with the mess and the injured Titus to care for and they argue and Niobe yells Jen’s favorite line as Vorenus is leaving. Vorenus hunts down the father of his grandson publicly humiliates his daughter and the father, then gives them permission to marry.

At the Senate, Pompey and Cato and other plotters declare Caesar a public enemy and they want him relieved of his command. A brawl, only slightly less violent than Titus’ brawl breaks out and no one hears Marc Antony veto and the session is never adjourned so the session has to be finished the next day.

That evening at some kind of dinner party thing, where Atia is entertaining Marc Antony, Atia bitches at Octavia to lighten up and basically be more entertaining to their guest. This is a mistake. Octavia is still pissed as hell that her mother not only sent her husband away, but that she had to listen to her mother have loud, obnoxious sex. So, Octavia asks Marc Antony how much he hates listening to her mother scream. Then, she delightfully imitates Atia in the throes of an orgasm. 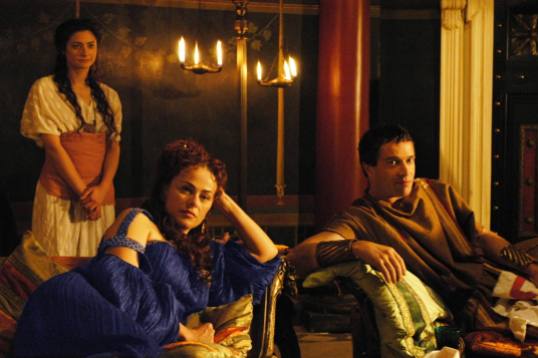 The next day, it’s time to go back to the Senate. Marc Antony is worried about his safety, so he has all the Roman soldiers he brought with him escort him. Titus and Vorenus are flanking Marc Antony. Remember the partner/dad/someone of the guy who was cheating Titus at dice? He launches himself at Titus who quickly takes him out, but first blood has been shed, and everyone thinks that dude was after Marc Antony. Everyone but Titus and Vorenus.

It turns into a free for all, and Vorenus is injured, but Titus rescues him and they all ride back to Caesar. Caesar gets the scoop then goes out and gives a particularly moving speech and everyone agrees that marching on Rome is the thing to do and Titus is hailed a hero, and when Vorenus wakes up he’s furious to discover that he’s now going against his political and religious ideals. 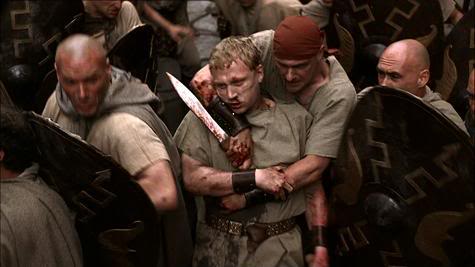 Oh yeah, and remember Niobe? Vorenus’ wife? The last shot of the episode is her nursing the baby. (That Vorenus didn’t realize she was lactating while they were having sex is stupid.)

On to the questions.

I really disliked what a bag of dicks Vorenus was to Niobe and his kids. Yeah, I know he’s probably got some issues, but c’mon. Quit being an asshole. I expected more from you than that.

There wasn’t any Servillia in this episode, but Atia was spectacularly and delightfully awful as a human being.

See above. Vorenus insisting on a doctor to save Titus’ life and Titus saving Vorenus in battle? All hands are now on deck of this ship, and Admiral Jarman has not only added to her Jarmada, but she’s also set sail.

Niobe bitching at Vorenus. Let me show you…

2 thoughts on “ROME S01E02: How Titus Pullo Brought Down the Republic or The Shitstorm of Bad Choices Made By Nearly Every Character in This Episode”

I’ve been trying to find the right words for day

The JUST RIGHT Release Party is going on all day t

I finally got some black watercolor paper, and I s

I made myself a quara-crown, so...I guess now I’

Today is a great day for playing in the dirt. 🌺

My son drew this at work on his breaks. His cowork

A million years ago, when I was still in college,

My lilacs are starting to bloom!!! #lilacs #lilacs

Here’s a little snippet from my upcoming release

A freaking awesome reader shared these photos with

Happy Mother’s Day to all of the moms, stepmoms,

Look at this tiny little catball. Willow is the s