This episode opens with the Arthur, Merlin and the knights in the woods behaving like obnoxious junior high schoolers  and playing Keep Away with with water flasks, and Elyan is thirsty. They continue riding and stumble across a shrine in the forest – there a bits of cloth everywhere tied on ropes and branches, crystals and charms and there are (I think) wind chime noises tinkling. It’s supposed to look all spooky and foreboding, but frankly, it just looks like a bunch of hippies had a drum circle there, then got high and wandered away. (My people!) 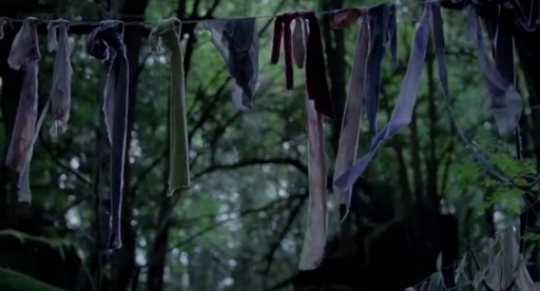 Merlin is all freaked out and telling them they should leave and finally, after mocking him, they do. But Elyan, victim of Water Flask Keep Away is thirsty and drinks water from some sort of cistern or well. After drinking the water, he sees an image of a creepy looking boy in the water, wigs out and leaves. 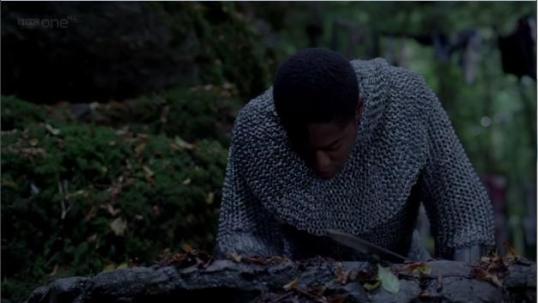 That night, Elyan tries to sleep, but the boy from the well keeps appearing to him and freaking him the fuck out.

The next morning Merlin goes to wake up Arthur and discovers that he’s fallen asleep in a plate of stew and is inordinately pleased about it. Arthur figures out Merlin was teasing him and sets him up to be the shield bearer on the practice field where Elyan goes berserk. Later, he keeps seeing the boy and ends up catatonic. 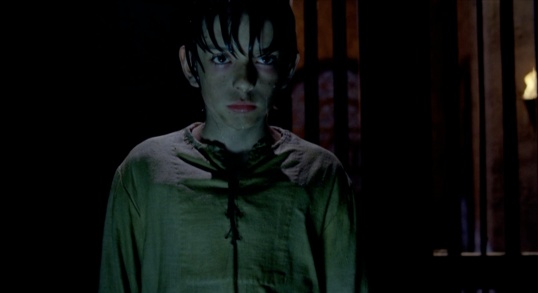 The boy finally speaks to Elyan and tells him not to be afraid and that all he wants is his death avenged. Elyan, under the control of the spirit at this point, tries to kill Arthur. Arthur fights him, but ends up letting him go because he recognizes that Elyan is not himself when he speaks with the voice of a child.

Gaius and Merlin go to the shrine and figure out that it was the site of an attack on a druid camp. And that the spirit wants its death avenged. 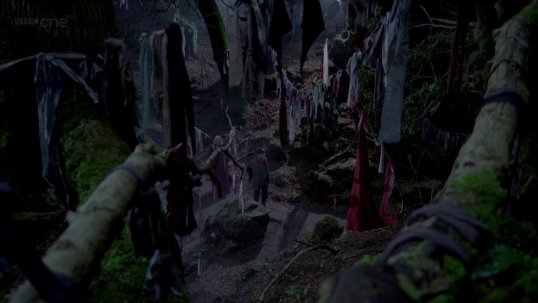 Elyan is eventually caught and thrown in the dungeon. Agravaine lobbies loudly and annoyingly for Elyan’s death and everyone thinks he’s attacked Arthur because he’s angry that Arthur has banished his sister, Gwen. Merlin breaks him out and plans to bring him back to the shrine to break the spell. Elyan knocks out Merlin and goes back to the castle to kill Arthur.

Gaius tells Arthur that the shrine was the site of one of Uther’s druid slaughters and the only thing that will stop the spirit that’s possessed Elyan is killing Elyan. Merlin sees him creeping out and follows (of course) him to the shrine.

Elyan (still possessed) steps out and Arthur confesses that the boy’s death was his fault. He apologizes and claims responsibility for the slaughter of the camp when he was young and stupid and trying to prove himself. He says that he told his men not to kill women and children, but he knows that not all listened. Arthur cries and kneels down, ready to accept death if that’s what the spirit decides. But the spirit, using Elyan’s body, hugs him and says, “I forgive you.” Then the spirit leaves Elyan. 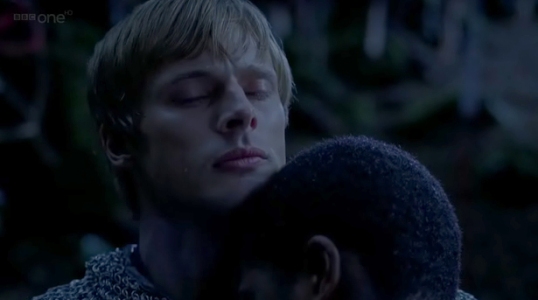 The next day, Merlin tells him that he likes this new softer, gentler side of the king and wants to know if they’ll be seeing more of that. Arthur is annoyed, so Merlin follows it up be asking for a hug. This doesn’t go well – except in Jess’ head.

1.)  If I’d written this episode… I dunno…less Agravaine? But that’s kind of a given in any episode, I suppose.

2.) The thing I loved/hated most about this episode. Unlike the last few episodes, I don’t have terribly strong feelings about this one. I did really enjoy Merlin being so delighted about Arthur waking up in a plateful of stew. And I really loved Arthur owning up to the slaughter. And crying. Yes. I enjoyed watching Bradley James shed a few tears. I’m premenstrual. Sue me. And as always, I loathe every time Greasy Agravaine is on screen. Hell, I even loathe when he takes a breath because I know I’m going to have to listen to him.

3.) Something you never noticed about this episode before.  How much deeper Colin Morgan’s voice sounded than usual.

4.) Favorite costume. Arthur in the blue hooded cloak when he sneaks off to the shrine. He should wear blue more often. This isn’t a great pic, but you’ll just have to trust me.

6.) What Merthur moment did Jess have the naughtiest thoughts about? The whole Arthur waking up in stew scene (and Merlin’s unspoken offer to lick it off him) or Merlin asking for a hug.

7.) What made Jen lose her shit  – in a good or bad way? Twitter breaking and making it impossible to tweet Merlin Club.

0 thoughts on “Merlin Club: Herald of a New Age or The One Where Elyan Sees Dead People and Doesn’t Like it One Bit”

I took a much needed break on Monday and Tuesday t

I love smoothie season! This one had kale, spinach

For the last few weeks, Loki has decided to attend

My daughter, a couple of her friends and I had a s

I’m so happy! My daughter, who works in healthca

Willow is pleased with her new lair. I mean, she d

I got another special delivery from my forever fri

Today was perfect for a walk. #spring #puremichi

I’m not sure how this is possible, but my sweet

I have very, VERY good news! Once dad’s doctors

When @the_turquoise_raven makes you the most gorge

Happy International Women’s Day! While IWD is a

Willow, Kitsune, and Loki would wish you a Happy C

I arted for my little brother, Martin. @kilted_khe